The Mazda Connect Infotainment System comes standard on the Mazda6, and includes a 7-inch full-color touchscreen and many fantastic apps.

The 2016 Mazda6 comes standard with a 184-hp, 2.5L 4-cylinder SKYACTIV engine, available with either a six-speed automatic or six-speed manual transmission.

The main issue with sedans is that they often don't offer drivers enough cargo space. This is why the 2016 Mazda6 has folding rear seats to accommodate more cargo.

You don't even have to take the Mazda6 key fob out of your pocket to enter or start the vehicle. This is convenient, but also increases security, as the engine won't start without the key inside the car.

A rearview camera comes standard on all trim lines of the 2016 Mazda6, making backing up and parking easier than they have ever been before.

There are few sedans in the same class as the Mazda6 capable of gas mileage numbers in the range of 38 mpg highway/26 mpg city. These go up to 40/28 with i-ELOOP.

The 2016 Mazda6 stands out at the head of its class in almost every category. It makes sense that the Mazda6 has been one of the flagship vehicles for the Mazda brand for so long, as embodies everything that makes Mazda one of the most popular and highest quality brands in the world. As the top sedan in the Mazda lineup, drivers can expect high-end features such as a strong lineup of safety technology. Safety features like Land Departure Warning, the Distance Recognition Support System, Rear Cross Traffic Alert, and Blind Spot Monitoring are just a few of the technologically advanced safety systems available on the 2016 Mazda6. There is also a rearview camera to aid drivers with backing up and parking the vehicle.

Performance ability is one of the most important aspects of a vehicle. And the 2016 Mazda6 does not disappoint in this department. Despite having a 184-hp engine capable of putting out 185 lb.-ft of torque, the 2016 Mazda6 is rated to receive an estimated 38 mpg on the highway and 26 mpg in the city. These efficiency and torque numbers are remarkable for a sedan in the Mazda6's class. Behind the wheel of the 2016 Mazda6, you don't have to sacrifice anything. 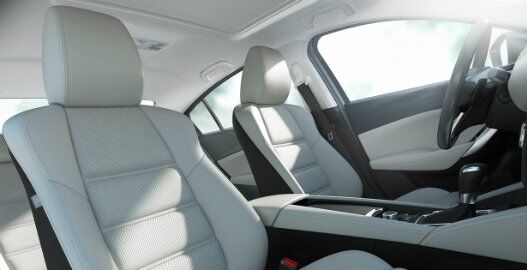 Does the 2016 Mazda6 Continue a Legacy of Greatness?

There are few critiques one can make on the 2016 Mazda6. This vehicle is all-around one of the standouts of the automotive industry today. Part of this appeal comes from the Mazda6's comprehensive infotainment system, Mazda Connect. If you like to listen to music or podcasts while you drive, the Mazda Connect system is perfect for you. There are several strong radio options included with Mazda Connect, including Pandora, Aha Internet Radio, Stitcher Internet Radio, HD Radio, and available SiriusXM Satellite Radio. Mazda Connect also comes with great features like available navigation, SMS response, and Bluetooth. Your connectivity and driving experience will both be taken to the next level with Mazda Connect. If you're interested in learning more about the 2016 Mazda6 in Bloomington IN, fill out the form on this page.